Where Does VoIP Jitter Come From?

When you first learn about ‘jitter’, you might think it’s a resurgence of a 1940’s dance craze.  Happy people dancing around is not what results from a network that has problems with jitter – unhappy users complaining about poor quality VoIP/UC and video sessions are the real-world result.

In a perfect world, packets transmitted every 10ms should arrive at their destination every 10ms so the listener has a perfect experience.  This would equate to a jitter of 0ms because there is no variability in the received packets. 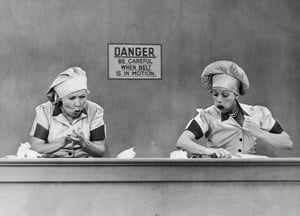 In the real world, some packets may be delayed, thus causing some packets to arrive late, with the packets behind them all being bunched up and arriving too soon behind them.  It’s like the chocolate factory where you want the chocolates to arrive once every five seconds so you can wrap them.  If there is a delay and no chocolates show up, then the workers get a break and have nothing to do.  When the chocolates start showing up again, they are all bunched together and some have to be discarded in order to “catch up”.

This “break”, and the discarded chocolates, all equates to missing audio and video information that the receiving codec can’t process.

Jitter affects real-time protocols like VoIP and video by creating drop-outs, clipped words, and video artifacts.  It ends up sounding the same as if there was packet loss, but there are no actual lost packets – just delayed ones that are too late to be used by the receiving codec.

What is Acceptable Jitter?

In general, jitter should be below 30ms when received by the endpoint.

Most video and audio codecs can deal with a certain amount of jitter, and some are better at handling jitter than others.  Devices contain jitter buffers that are used to reduce the effect of jitter.  If jitter is higher than 30ms, then the codec in the receiving endpoint will have problems splicing the conversation back together to have the audio sound smooth to the listener.  All of this re-assembly of the conversation has to be done in real time.  As a result, a jitter buffer can only accomplish so much repair before it has to give up and discard a packet that arrived out of its time window.

How Do You Detect Jitter? 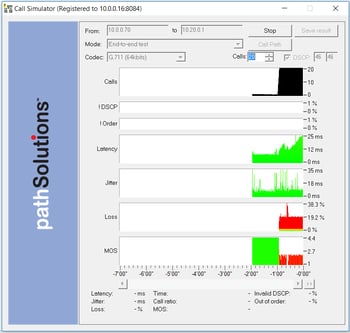 Jitter can be detected in a variety of methods:

When packets are sent over a network interface, it must put the packet into a queue to be transmitted.  If the queue is empty (no other packets to be sent), then the packet can be immediately dispatched to the network.

If there are other packets to be sent, then the queue may get very long and jitter will increase as the VoIP packets are stuck inside buffers.  This is made worse if there are data packets, as they tend to be larger (1518 bytes) and will create more delay.

This “queueing delay possibility” will occur on every network interface involved along the path through the network.  This means that there may be hundreds of interfaces involved in passing traffic for a VoIP/UC or video call, and each of them may be queuing other packets that will create a little bit of jitter for the conversation.

Jitter can also be caused by CPU limitations on network devices.  If a network device is “CPU bound” and is not using hardware ASIC chips to route or switch packets, the CPU may become a stalling point, thus causing some packets to be slowed down on their way to the destination.

Preventative steps to avoid creating jitter in networks are:

Troubleshooting where jitter is coming from can be challenging due to the number of network interfaces and devices that need to be checked.

Troubleshooting Jitter can be a two-step process:

Since Jitter is a sporadic problem, you may not be able to find the source of the problem if you don’t have a historical perspective of the above information.

Remember that Jitter is Additive

Overall, jitter can be prevented if the right information is brought to bear about your network’s performance.