Not Even The U.S. Government Is Impervious To Network Hardware Failure 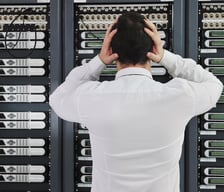 It appears that the U.S. government is in need of a “State of the Network” address.

On the evening of Jan. 21, the U.S. Senate was hit with an unexpected network outage that took down its central email system as well as some of its websites. The outage lasted for about 12 hours before being resolved.

What caused the prolonged period of downtime? According to the Sergeant-at-Arms office, the problem was traced to a hardware failure on one of its routers. No evidence of tampering had been reported. It appears that this was simply a case of faulty equipment.

The big takeaway from this occurrence is the amount of time that it took to identify the root cause of the problem. The network went down at 5:20 p.m. The issue wasn’t identified until 9:06 p.m. that night. Repairs were completed early on Thursday morning.

Suppose a major emergency occurred during this time, and communication was restricted by the broken router? Senators and House members would have had a harder time relaying critical information back and forth.

Fortunately, the Senate was lucky as the issue was discovered only a few hours—and not a few days—later. The error could have just as easily occurred in a remote part of the network, which would have been much harder to locate.

This is a perfect example of how real-time network troubleshooting is critical for ensuring uptime in an organization. The longer you wait to locate the root cause of a network problem, the more the risk intensifies. Every organization should therefore make it a point to reduce the amount of time it takes to spot the cause and location of a network problem.