Where Does Latency Come From and How Do You Control It? 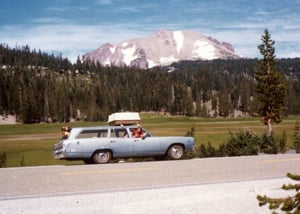 The age old question evokes images of family vacations that involve long drives with kids in the station wagon packed together like sardines. You keep telling yourself that it's all about the journey—when you really think about it, your target is the destination and you just want to get there. Shortcuts, your cell phone and Google Maps are your friends. Toll booths and traffic jams are not.

Latency is defined as the delay between when a data packet was transmitted and when it was received.

More specifically, latency is the average delay seen over a period of time.

If there are any differences in delay, this is tracked as jitter (see the blog article, Where Does VoIP Jitter Come From).

In a perfect world, packets transmitted would arrive just a few milliseconds later at their destination no matter how far the receiver is located from the sender, or how many devices were involved in the communications path. In the real world, there are many delays that occur on networks that can prevent packets from arriving quickly.

How Is Latency Measured?

Latency on networks is typically measured in milliseconds (ms). In many cases, latency is reported as a round-trip measurement. This is due to the fact that there is no way to accurately measure single-direction latency unless both transmitter and receiver have very precise clocks.

There are many reasons that packets can be delayed as they move towards their destination:

VoIP over high latency links may not have any quality problems, but it creates awkward communications involving interruptions, talking on top of someone else, and strange silences because you don't know if the other person has stopped talking yet.

What Is Acceptable Latency?

One-way latency for VoIP/UC should be below 125ms (250ms round-trip). Users will tend to notice higher latencies.

How Do You Detect Latency?

Latency is typically detected via pinging the remote IP address and noting the resulting time. 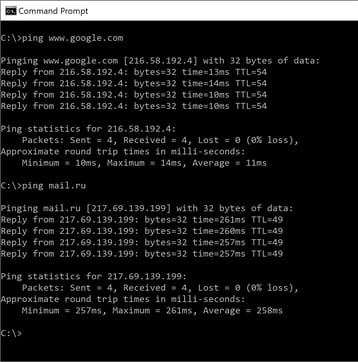 This example shows the time required to ping www.google.com from my location as ranging from 10ms to 14ms.

Uni-direction latency for this may be 5ms to 7ms.

The time required to ping mail.ru from my location ranges from 257ms to 261ms.

Uni-directional latency for this may be 128ms to 130ms.

While ping is a simple indication, it may not take into account QoS or packet size queueing that may be enabled for different applications along the path. In this case, it is recommended to use a call simulator that will properly emulate the RTP footprint on the network and report the correct latency seen by that application with that QoS marking.

How Do You Solve Latency Problems?

Reducing latency should be the goal of both network and telecom teams. Here are some considerations that will help to reduce latency:

Review our white paper or contact us with questions about how PathSolutions can solve call quality and many other VoIP issues.