Stories from the Field: The Lightning Strike on the Fire Department's Radio Tower

For System Administrator Appreciation Day, we asked our customers to submit a story about their heroic deeds on the job. We wanted to recognize all the hard work from these unsung heros, keeping their organizations afloat and all systems running, 24/7.

Martin Brown, the Network Services Specialist for City of Pitt Meadows sent in this amazing story:

"A few years ago we had a sudden severe storm during the day. The Fire Dept. was fully deployed to multiple lightning strike calls when (several km down the road at my desk) I noticed that on my PathSolutions network map I have up on a flat screen TV in my office, the Fire Department's VOIP switch goes dead. I also started receiving alerts from Path.
I got a call from the Fire Chief while I was already on my way there. He was impressed with that.
It looked like there was a lightning strike on their radio tower which energized the buildings ground and fried the VOIP switch despite being protected by a UPS. 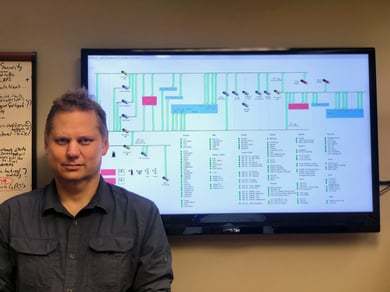 I reconfigured their PC switch to also handle VOIP traffic temporarily and got many of their phones back up and running.
I later found black scorch marks on the Ethernet port of the backup internet connections modem where significant current must have arced to ground. Some PC NIC's also got fried.
This was one of the busiest days ever for the Fire Department."

Martin, the Fire Department was lucky you were on-the-job and keeping all systems operational.