Run for Your Lives, It’s the Attack of the Giant Ethernet Frames!

We’ve all heard the mantra: “Bigger is Better.”  Sometimes that’s true (as in paychecks) and sometimes this is less than true (as in Attack of the Giant  fill-in-the-blank  B-Movie monster).  Just as in many other things in life, there have been debates over size in the networking world as well. How big is too big?  Will monster-sized Ethernet Frames run through my downtown network, flattening everything in their path, and causing crowds of users to go running through the streets in terror?

Find out more, in this week’s exciting post!  While we promise not to knock holes in your buildings, or crush any cars while we tackle this monster topic, we still advise all of our customers not to trade any of their cows for magic beanstalk beans.

It All Started with an Ordinary Frame…

In order to understand strange extra-large variations of Ethernet LAN Frames, we should first make sure everyone is generally familiar with some of the standard features of an Ethernet Frame.  An Ethernet Frame consists of a number of information fields used for signaling, traffic routing, classification, and error handling.  These fields are shown in blue in Figure 1 below.

The area shown in green is the portion of an Ethernet frame that carries actual data.  In a standard Ethernet Frame, this field can be as large as 1500 bytes or as small as 42 bytes (when using 802.1Q Tagging).  Some protocols may use very small packets to send a single piece of data (for example, the temperature of a thermostat), while other protocols may use maximum-sized Ethernet frames to move large amounts of data (such as performing a file-transfer, or disk-backup). By offering programmers a choice of Ethernet frame sizes, it was hoped that the standards bodies could avoid a standards-war between advocates of very small frames, and those who favored larger frames.

One primary difference between large and small frames is the ratio of ‘overhead’ bytes to payload bytes.  Figure 2 shows a quick comparison of the amount of bandwidth available to send data on a line versus the amount of data used for ‘overhead’ signaling.

In addition to signaling overhead using up bandwidth on a network connection, the more signaling that exists on a line, the more work that networking equipment has to perform to process that traffic, driving up network equipment processor usage.

The original Ethernet Standard Frame was built to run on a 10Mbps wire that was shared between all attached computer nodes.  At the time, Full Duplex connections with dedicated bandwidth, High Speed Ethernet Switches, and 10 Gigabit Ethernet connections were the stuff of science fiction.  A payload limit of 1500 bytes was a reasonable maximum frame size for the equipment imagined at the time the standard was written.  The 1500 byte payload kept collisions down to a manageable level, allowed more traffic to share the line, and minimized the amount of memory that network devices required for buffers. 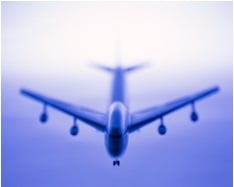 In the early days of Gigabit Ethernet, some specialized server-to-server Ethernet applications began to experiment with “Jumbo Ethernet Frames.”  Jumbo Frames allowed these specialized servers to stretch their payload from the standard 1500 bytes to as large as 9000 bytes.  With the new frame sizes, server backups and large data transfers between servers was dramatically sped up, while minimizing the impact to server processor and I/O performance.  Eventually, LAN switch vendors began to support Jumbo Frames but not all of them supported payload frame sizes as high as 9000.

Today, some Carrier Ethernet Equipment (used for high-speed Metropolitan Area Ethernet networks) use a payload size of 1600.  This allows network operators to take a customer’s standard “1500” sized Ethernet Payload, wrap some additional signaling around it (such as MPLS), and fit the standard frame inside their “Baby Giant” Ethernet Frame.

There are a small number of specialized research networks that are currently experimenting with Ethernet Frames using a payload larger than 9000.  These are becoming known as “Super Jumbo” frames.

There are a number of special challenges with using larger-than-normal frames.  If two computers decide to use a 9000 byte Jumbo Frame, EVERY piece of LAN equipment between these two computers MUST support Jumbo Frames, and be configured to handle Jumbo Frames at least that large.  If a single piece of LAN equipment cannot handle a frame that large, the result is like a 14 foot (4.27 meter) tall truck attempting to drive through a 10 foot (3.05 meter) tall tunnel!  The crunching noise you will hear will be the Ethernet frame crashing to the floor as the standard Ethernet equipment decides that the frame is too large, must be faulty, and should not be forwarded on the network.  As a result, no jumbo frames will make it through that part of the network, and the resulting re-transmissions will likely clog network links at both ends.

Jumbo Frames sent over slow speed connections have also been known to reduce the ability of multiple computers or applications to “play nicely” over a single network connection.  You might think of a section of road where three lanes merge into one.  A large number of tiny cars can flow together without too much disruption.  However, if a 1/2 mile (0.8 kilometer) long railway train were to merge into the same road section, the other traffic lanes would need to wait long enough that many cars would arrive at their traffic destinations very late.  Jumbo Frames, like long railway trains, typically do better traveling on dedicated, specialized paths.  When short VoIP voice packets encounter long delays waiting behind Jumbo Frames, the result is typically long periods of dropout silences as the flow of audio packets comes to a stop, then resumes.

If you are using Jumbo Frames, you will want to keep an eye out for the “Low Bridges and Tunnels” on your network.  If you are using only standard Ethernet frames, you might want to keep an eye out for any stray Giants, Jumbos, or other XXL creatures appearing on your network.  While you may not be planning to use Jumbo Frames, you wouldn’t be the first network administrator to find an ambitious user re-configuring their machine to use larger frames (remember Bigger is Better?).

PathSolutions software can help to detect Giant Frames.  Giant Frames are frames which are too large to be handled by a given piece of network equipment.  PathSolutions network management systems can track whenever Ethernet network equipment is being sent packets larger than they can handle and what network interface is having problems with these frames.  These errors show up as “Frame Too Long” errors, as shown in Figure 3 below. 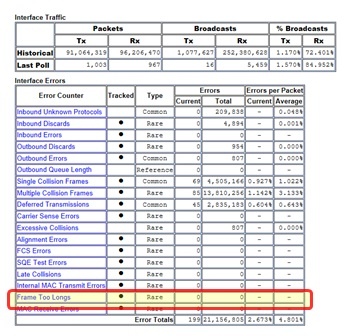 So, now that you know how to keep your network safe from giants, defeating extra large problems with ease, I hope that this knowledge proves useful in helping your network to run at maximum performance, and operate happily ever after!