Why Are Out Of Order Packets Bad
For VoIP Call Quality

If your network is designed to support low latency, low jitter, and low packet loss for real-time protocols like VoIP and video, you might think that’s all you need.

However, if packets arrive shuffled at the destination, the receiving codec is not able to re-order the packets to play them in real-time (otherwise, you might end up sounding like Yoda!). This means that a lot of successfully delivered packets are dropped by the codec, and users will encounter clipping and dropped words.

If the out-of-order situation is bad enough, the codec may drop one side of the conversation, resulting in one-way-audio, or the entire call may drop.

Out-of-order packets can occur when there are multiple layer-2 or layer-3 paths to the destination, and the wrong load balancing mechanism is employed. For example: Two gigabit links are trunked together to create a large, fault-tolerant pipe between two switches, and are configured for per-packet load balancing. In this case, packets for a single VoIP conversation may take either trunk link to reach its destination.

This is similar to multiple checkout lanes at the supermarket – there’s no guarantee of the order in which shoppers are processed (and the other line always moves faster anyway).

Instead, configure the trunk port for per-flow load balancing. In the supermarket example, this is when there is one long line and the shopper at the front of the line goes to the next open checkout counter.

If your network didn’t drop a single packet, how do you detect this problem?

There are two ways to investigate out-of-order packet problems:

PathSolutions TotalView Call Simulator automatically tracks out-of-order packets to make sure that this problem is not happening in your environment.

Click here to view a PDF version of this Fact Sheet. 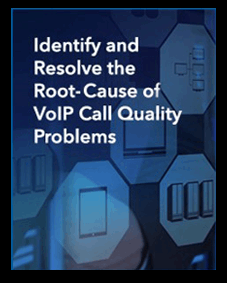 Identify and Resolve the Root-Cause of VoIP Call Quality Problems